President Levering Tyson,  Muhlenberg’s fifth president (1937-1951) was the first layman to take the helm of the College. The economic climate of the Great Depression, the debts incurred from the massive campus building initiatives of the 1920s, and the looming crisis in Europe presented challenges that the first businessman-president was equipped to address.

President Tyson working with staff, circa 1945.

Levering Tyson was born in Reading, Pennsylvania on April 9, 1889 to attorney Charles H. Tyson and his wife, Emma. He earned his B.A. from Gettysburg College in 1910, an M.A from Columbia University in 1911, and eventually a Litt.D.  from Gettysburg in 1930.  In 1914 he married Reba Pomeroy Kittredge, and they had three children.

Tyson remained at Columbia until 1930, serving first as alumni secretary, then as director of the extension program. He was a founder of the American Association for Adult Education. His exploration of the educational possibilities of radio led him to the directorship of the new National Advisory Council on Radio in Education, part of the Carnegie Corporation, a position he held until his Muhlenberg appointment.

In 1937, the curriculum was of immediate concern. The antiquated Bachelor’s of Philosophy was dropped in favor of reinvigorated Bachelor of Arts and Bachelor of Science degrees. The new Science building facilitated growth in course offerings, and genetics and photography were added to physics, chemistry and biology.  The College gained national attention for the excellence of its pre-med program. The College staff was expanded, adding individuals who were to become fixtures at Muhlenberg for many decades, including Gordon Fister, Director of Public Relations, Harry “Haps” Benfer, Dean of Freshmen, and Dr. Thomas Weaber, Jr.  of Health Services.

Dr. Tyson’s handling of the 1940s, of the impact of World War II and its aftermath, was forward-thinking and ambitious. Even before the attack on Pearl Harbor, young men were lining up to do their patriotic duty; Muhlenberg’s enrollment dropped from 525 in 1939 to 140 in 1941. In an attempt to stem the tide, numerous approaches were tried, including the first voluntary training program in Pennsylvania for students likely to be called up, and a Civil Pilots Training Program. Through Dr. Tyson’s tireless lobbying, Muhlenberg was selected as one of 131 colleges and universities to become a site for the Navy V-12 Training Program, which was designed to prepare students for officer candidacy. Accelerating to three semesters per year, enrollment numbers returned to the 500s as young men from around the country arrived at Muhlenberg to complete their degrees and deploy.

The financial support that came with the Navy’s trainees allowed the College to remain operational, but did not satisfy the debts inherited from the previous administration.  The influx of students who arrived on the G.I. Bill in the post-war period placed an incredible strain on Muhlenberg’s physical and academic resources.  Over 1300 students arrived in 1948, yet as the post-war period waned, enrollment dropped back to 575 in 1951-52. Continued financial struggles, low projected enrollment, the looming Korean War, and a devastating fire in the Administration Building (Ettinger) in May, 1947 all contributed to the resignation of President Tyson in June, 1951.

His successor Dr. Seegers said of him: “Dr. Tyson did a great deal for Muhlenberg College. He shook out the hayseeds and gave the college a degree of sophistication and urbanity. His contribution was a great one.” Following his Muhlenberg years, Dr. Tyson was involved in the operation of Radio Free Europe, and returned to Columbia University’s alumni affairs department. He retired in 1961, and passed away in Brielle, New Jersey in 1966. 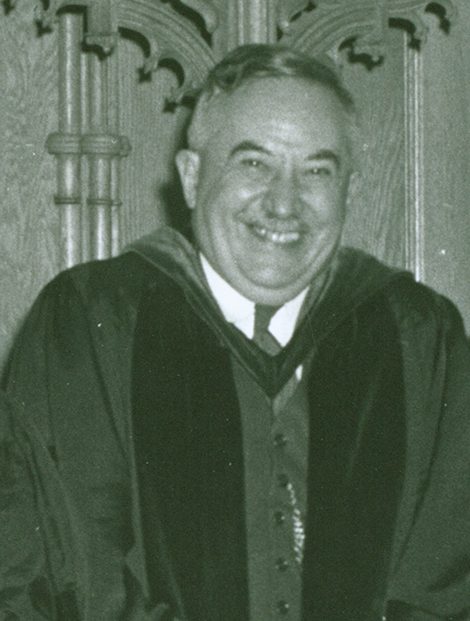