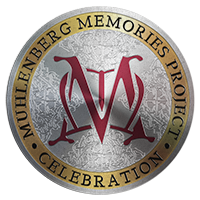 Fifty years ago, on May 30, 1970, Muhlenberg College dedicated the John V. Shankweiler Biology Building, a fitting tribute to the architect of the science and pre-medical programs of the College. Almost exactly ten years later, on May 25, 1980, Dr. Shankweiler passed away. To commemorate these anniversaries, the Muhlenberg Memories Project team has brought together archival resources and student work that help tell the story of the legacy of “Doc” Shankweiler.

“Doc” retired in 1964, and in 1970, the John V. Shankweiler Biology Building was completed; at the dedication, Dr. W. Clark Wescoe ‘41 paid tribute to the “undying and unquenchable spirit of a superlative  teacher, single-minded in his purpose, successfully achieved, to do his best in a life earnestly given in service to students, to science, and to his adopted college, each enriched beyond measure by what he gave.” Today, the Shankweiler Scholars Honors Program is a living tribute to Dr. Shankweiler’s legacy of excellence and service as it supports students in the “exploration of the human dimensions of the practice of medicine.”

From the May 1940 Alumni Magazine

View the full Shankweiler footage below.

View the video with built-in chapters

Dr. Shankweiler’s oral history was recorded as part of the John S. Davidson Oral History Project (1972-1987). Davidson, librarian at the College for thirty-three years, had conceived of the project, and it was named in his honor. It was undertaken by Dr. Katherine Van Eerde, professor of history, who appears as the interviewer on many recordings, along with Dean Philip Secor.

Contributors to the oral history project include Davidson; Dr. Shankweiler; Dean of Women Anne Nugent; librarian Mary Funk; music professor Harold K. Marks, Class of 1907; President John Morey; and many more. Special Collections and Archives has been transferring these interviews from cassette tapes and working with student interns and faculty members to transcribe them;  they will be released as they are completed throughout the summer and fall of 2020.

In January 1973, sitting in the Muhlenberg Room at the college library, Dr. Katherine Van Eerde sat down with Dr. John V. Shankweiler ‘21 to reflect on his remarkable career at Muhlenberg as student, professor, department head, founder of pre-medical studies, and emeritus professor for over half a century. Known as “Doc” to most, Dr. Shankweiler contributed to Muhlenberg’s national recognition in pre-medical studies through his progressive ideas about building relationships with medical schools, medical communities, thought leaders at the frontier of medicine and, of course, students. On campus, along with a dynamic cohort, he was instrumental in shaping not only the sciences, but also the curriculum and policies of Muhlenberg. In athletics, Doc coached, served as chairman on the Athletic Committee for over a decade, and ensured tennis was a recognized official sport. With his Pennsylvania German ancestry and warm sense of humor, Doc’s interview reveals his formidable accomplishments, his witty anecdotes, and his unique perspective on the college’s history.

Listen to the oral history

Within oral histories from alumni from the 1940s, the name “Shankweiler” evoked recollections of a man who was all for Muhlenberg and all for student success.

The legacy of Dr. Shankweiler is revealed throughout Trexler Library’s archives: during his 50+ year affiliation with Muhlenberg College, there are few areas he didn’t touch. In 2019, the archives was fortunate to receive a gift of photographs, scrapbooks, and correspondence from Dr. Shankweiler’s grandchildren, presented by Ann Bodnyk ‘69. Those materials have been processed and the finding aid is available here. They may be viewed by appointment at Trexler Library.

This student-produced documentary reflects one of many team projects focusing on key personnel in Muhlenberg College’s history. The projects are part of course work in Documentary Research, taught by Dr. Kate Ranieri, in collaboration with Susan Falciani Maldonado, Special Collections and Archives Librarian, and Anthony Dalton, Digital Cultures Technologist

John V. “Doc” Shankweiler was an involved student at Muhlenberg College. After he graduated, Shankweiler returned as a Biology professor and worked to get his students into medical school. Shankweiler’s appreciation for Muhlenberg is expressed through his unfailing efforts to support and advance Muhlenberg’s Biology Department and its students.

The John V. Shankweiler Biology Building stands as an abiding legacy of Dr. Shankweiler’s astonishing impact on Muhlenberg. A legend in his own time, Doc was a progressive thinker, a multi-talented member of the College faculty, and a beloved colleague and mentor. And, in the spirit of Dr. Shankweiler, an exemplary role model, the Shankweiler Scholars Honors Program continues his quest for intellectual rigor and service for students interested in the science and art of medicine.